By Kin Yung April 20, 2016
I was browsing across some forums and notice someone mentioning using a tool called Rufus to create a bootable USB stick from a ISO image of Windows. So I thought let me give it a go with a ESXi ISO.

In the steps below I was using Rufus version 2.8 and VMware ESXi 6.0 Update 2 ISO 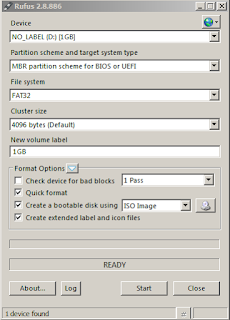 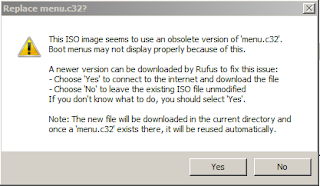 Once it is completed then the USB stick is ready to be used as a way to install ESXi. As you can see with a few simple steps above you now have a bootable USB device which has the install files for ESXi.

This could be very useful in my opinion where you can not use remote management software such as iLO to mount ISO images to install. There could come a time where you need to create custom ISO (http://goo.gl/deuRDn) but was unable to burn to a physical media. Using USB would be quicker and you could recreate the image again and again not wasting any media. This software could also be used for deploying other OS such as Linux and Windows.

Enjoy this and all credit to the people at Rufus for making such a cool tool to be used.

By Kin Yung July 01, 2020
There is an option in VMware where after you have performed an major upgrade of ESXi you can roll back to your previous version. The benefit of this is that you would not need to reinstall your ESXi and its configuration if you had issues with the new software. I had to do this on one occassion in my lab where I upgraded from 6.5 to 6.7 and my VMs would not run because the CPU was not supported in 6.7. Please remember if you are using ISO method to upgrade ESXi please ensure you select "Upgrade ESXi, preserve VMFS datastore". Selecting "Install ESXi, preserve VMFS datastore" does not mean preserving datastore means retaining ESXi as it will still do a clean install of ESXi. This method does not work for vSphere 7.0 as there are changes to the partitions on the boot device. Below are the steps to roll back to a previous version which is quite straight forward. As always perform an backup of your host configuration before you upgrade or rollback ( KB2042141 ). I have
Post a Comment
Read more

By Kin Yung October 22, 2013
Today I came across in my LAB where when I tried to access my vSphere Web Client in chrome and I just get a blank web page with no error message. At first I thought my vCenter Web client service was having issues and did a couple of restart. I then decided to use firefox and internet explorer to make sure it was not a browser problem and it appeared to work in the other browsers. Next I decided to clear all the cache in Chrome and it still didn't work at all !!!. Last resort for me was to try and reset the browser settings to their original defaults which worked. So to reset the browser settings to default you need to: Open chrome > Open Settings > Show Advanced Settings > Reset browser Settings > Reset Close Chrome and open again and if you was using self-signed certificates click "Proceed anyway" Just a word of warning of reset browser settings where you will lose all your settings. There is an article on VMware website but it is for issues with acc
7 comments
Read more