I came across an issue where I was trying to delete a failover relationship between two DHCP server (Windows 2012 R2) because one of the servers had a hardware fault and we couldn’t recover the server. We knew we had to built a new one so one of the steps I tried to initially take was to mark the failed server as “partner down” in the relationship. 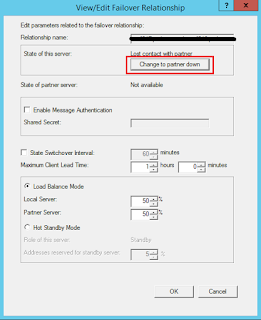 Upon click the button I get this message which is promising

Now depending on how you set you DHCP failover modes you could run in to issues if your setting was like the one I had where it was set at “Load Balance Mode” with 50/50 and I was unable to change the partner status to down.

This is Microsoft explanation of the difference of “Lost contact” vs “Partner down”
“In load balancing mode, when a DHCP server loses contact with its failover partner it will begin granting leases to all DHCP clients. If it receives a lease renewal request from a DHCP client that is assigned to its failover partner, it will temporarily renew the same IP address lease for the duration of the MCLT. If it receives a request from a client that was not previously assigned a lease, it will grant a new lease from its free IP address pool until this is exhausted, and then it will begin using the free IP address pool of its failover partner. If the DHCP server enters a partner down state, it will wait for the MCLT duration and then assume responsibility for 100% of the IP address pool.”

As you can see if you do not change the status of the failed server to “Partner down” then the working DHCP server will not be responsible for the full 100% of the scope. You need to be careful that overall that you don’t use more than 50% of the scope on average so that if you do have any issues with one of the DHCP servers then you don’t need to panic to quickly fix the issue. The above recommendation is my personal view and would only apply based on my setting that I have on this article.

As I couldn’t change the status of the failed server I decided to try and delete the relationship as we would need to create a new relationship as the new server might not be using the same server name. 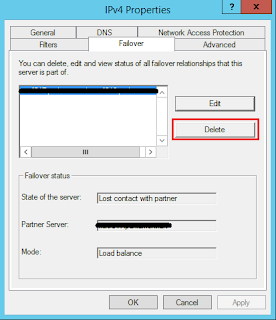 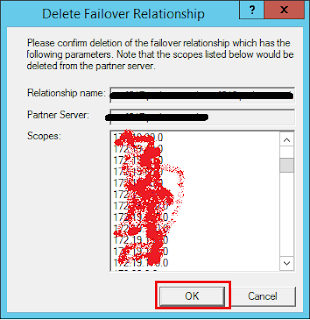 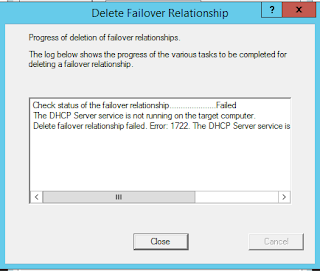 At this point I tried to do a bit of googling of this error code of 1722 and looked at the event viewer but didn’t get anything useful. I then did a quick search to see if there was command line to delete the relationship and came across a forum where someone used a cmdlet;
remove-dhcpserverv4failover -computername %ComputerName% -Name %RelationshipName% -Force

You would need to replace %ComputerName% with the FQDN of the working DHCP server, %RelationshipName% would be the name of the relationship that you would like to delete
Once you run the command you will receive an error message like below saying the relationship has not been deleted but when you look back at the failover properties it is deleted.

Hopefully this can help people where they have struggled to delete the relationship whether it is due to a server that has failed or have done a DHCP database restore  onto a different server. It all comes down to using powershell 😊 to save the day