By Kin Yung February 05, 2013
At my work place we have our Exchange 2010 running completely on VMware. We use SCOM as our main monitoring tool so we purchased Veeam nWorks to pass on all the metrics to SCOM and generate alerts where needed.

Over the pass few weeks we started to receive alerts regarding dropped packets from an host. At first we thought we had over subscribed the bandwidth but after looking at performance charts within vCenter for the host. We noticed that we had been having drop packets for a while but was unaware of the issues as it never hit the threshold for SCOM to send an alert for us. After seeing this we quickly checked across all our host in case we had an underlying issue waiting to happen and found out is was only happening on host which was hosting exchange. Further investigation we discovered it was coming from just our mailbox servers. 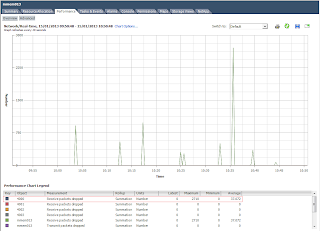 There was an article released from VMware regarding this problem. The issue is due to the fact we are using vmxnet3 network cards and when Exchange has a burst of traffic the network card buffers can't take it. The workaround or fix is to increase buffer on the network card. The process is described in the KB article: